Is America at a Pre-French Revolution Level of Inequality?

Get POP in your inbox.

I’ve been a Redditor for over a decade. I follow hundreds of subreddits to be entertained, informed, and to learn something new daily.   As a data nerd and engineer, I constantly question the information with which I’m presented.  Such was the case when I came across this post by @AubreyLefkowitz on r/WhitePeopleTwitter.

In searching for a source for this claim, I came across this same bar chart graphic recently posted on both r/SandersForPresident and r/LateStageCapitalism. With the timing of Aubrey’s Twitter post relevant to this graphic circulating online, surely this is the source of her comment.

The reference for the French Pre-Revolution data is found on pages 59-83 of the 4th volume of the European Review of Economic History, specifically a paper titled The Income Inequality of France in Historical Perspective.  A quick read of the paper’s title is enough to debunk the claim of Twitter and the graphic.  Few things get under my skin like misrepresented data.  Income is not the same as wealth, although I’ve heard people on both the left and right falsely equate the two when discussing inequity. Wealth, being the net effect of income, spending habits, and other factors, is important to understand but I’ll reserve that for another blog post.  The opportunity to build wealth is deeply rooted in income, so let’s focus on income inequality first.

This paper makes clear that “there are no reliable estimates of how income was distributed before World War II… The absence of information about the income distribution in the eighteenth and nineteenth centuries presents a serious impediment to understanding how the socioeconomic fabric of France evolved during those times that preceded (the revolution).”  Wealth metrics are harder to confidently estimate than are income estimates, so this series of quotes from the original source gives me great confidence that no one has yet found wealth inequality metrics for Pre-Revolution France.

After clearly stating the difficulties in their work and the many assumptions that got them to a result, the authors of the paper presented a table summarizing a rough estimate of income distributions as derived from capitation assessment (their form of taxes).  This is the apparent source of the bar chart falsely claiming to show “Wealth Distribution in France, 1760-1790,” the period leading up to the French Revolution.

Data for the U.S. are from the U.S. Census Bureau’s Income and Poverty in the United States, Table A-4, and data for all other countries are from Eurostat.  France is included, so we can see how things stand there with income inequality pre-1800 and in 2018.  Switzerland, the UK, and Estonia are shown because they are among the Top 10 countries of the 2020 Economic Freedom of the World Index, with high rankings associated with being capitalist.  It’s worth noting here that the U.S., which is a republic that already has a mixture of capitalism and socialism, is absent from the Top 10 in this ranking.  Lower rankings on this Economic Freedom metric are associated with communism and socialism, with Greece, Italy, and Turkey being the European countries lowest on the list’s spectrum, so they show what sort of income distributions might be expected with such non-capitalistic political systems. 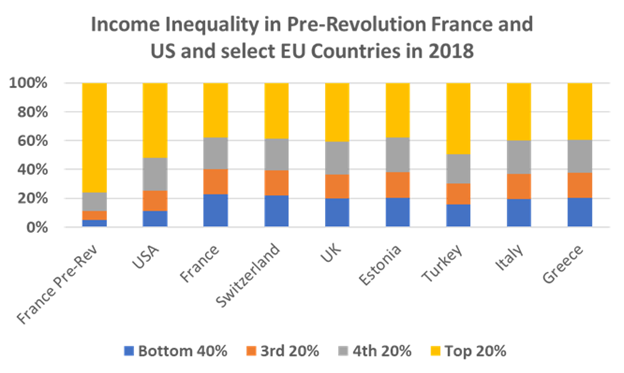 The income and ownership stake that Jeff Bezos has had from Amazon or that Bill Gates has had from Microsoft has propelled them to astronomical personal net worth (wealth).  But, again, we’re talking about income inequality first in this article.  These individuals have taken what many (including myself) believe to be exorbitant compensation year after year, driving us towards Pre-Revolution France income inequality and away from the distribution patterns seen currently in EU countries — but we’re still a far cry away from the income inequality that existed in France in the 1780s. Marie Antoinette and other monarchs of the time quite literally built fake, fully staffed villages on their properties to masquerade as common folks for fun; theirs was a true ruling class on one end and peasants on the other.  Sure, we’ve got an eccentric billionaire who shot his used car into space to entertain us all, but we’re no Pre-Revolution France.  We’ve got work to do to correct income inequality should that be a common enough voting point to drive policy in the U.S.  If you’re one who feels strongly about this issue, maybe stop boycotting beans and start boycotting the companies which have driven this very trend by so grossly overcompensating their leadership.  Good luck canceling Google, Facebook, Microsoft, Twitter, Apple, Amazon, Starbucks (here’s some guidance on just how impossible that is and some great leftist press exalting some of these giants and their wealth).

California Got What They Deserve

America is No Longer a Free Country

Why Conservatives Must Support Antitrust Laws